Former president Donald Trump knows what it’s like to be called Hitler. It was something that countless Democrats were guilty of while Trump was president. I not only defended Trump against this vilest of all slurs, but went on the attack against all who disgraced themselves for saying it.

But that didn’t stop Trump from inviting the antisemitic Greene to his Pennsylvania rally, which he held for the ailing and vacuous campaign of my friend, Dr. Mehmet Oz, and Republican Gubernatorial candidate Doug Mastriano. Nor, of course, did it stop Oz from appearing on stage right after Greene to promote his candidacy.

And then we wonder why America is a nation in crisis, for which both Democrats and Republicans are equally responsible. 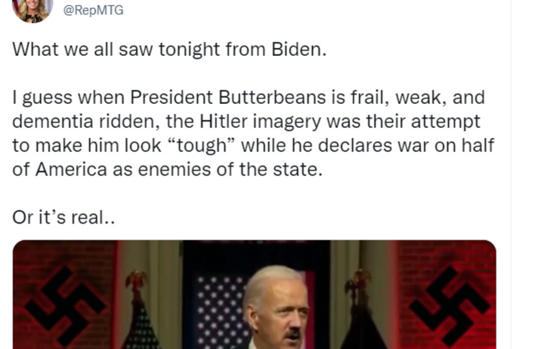 MTG posts video of Biden speech with deepfake of Hitler’s face on Twitter. (credit: screenshot)© Provided by The Jerusalem Post

The most glaring flaw of American politics is the utter hypocrisy of Republicans and Democrats. Republicans are allowed to call Biden “Hitler” and Democrats are allowed to call Trump “Hitler.” Each side will assail the other for using the term only when it is used against their own leaders. Otherwise, it’s perfectly OK to denigrate the murder of six million Jews by reducing the genocide to a political hit.

During the Trump presidency, it became commonplace for Democrats to compare Trump to Hitler. One notable example was a column by Rabbi David-Seth Kirshner in the New Jersey Jewish Standard, where I am a columnist. Kirshner wrote, “Where I quibble with those like Rabbi Boteach is, when exactly is the moment of worry which officially allows us to sound the alarm bells? Must one first kill six million Jewish souls to be categorized as ‘Hitler?’” And this was in March 2016, before Trump was even president!

From there the cacophony of Trump as a dictator, Trump as a genocidal maniac and Trump as an American Hitler only increased.

By March 2019, we heard some of the top Democrats in the county outright comparing the US president to the Nazi monster. Here is South Carolina Congressman James Clyburn, an otherwise great leader, on Trump: “Adolf Hitler was elected chancellor of Germany. And he went about the business of discrediting institutions to the point that people bought into it. Nobody would have believed it now. But swastikas hung in churches throughout Germany. We had better be very careful.”

Then you have good old Jerry Nadler, the congressman who proved easy pickings for the Obama administration when they sought to obtain a Jewish legislator to support the Iran Nuclear Agreement, even as it posed an existential threat to Israel. For Nadler, it isn’t the Mullahs of Iran who should be compared to Hitler, even as they promise a holocaust of all the Jews in Israel.

No, it was Trump – who moved the American Embassy to Jerusalem – with his Jewish daughter and Jewish grandchildren. “You’ve heard the president and the administration say that immigrants are thieves, that they bring in drugs, that they’re responsible for lots of crime… This is the same type of propaganda that we heard in the 1920s and World War I against Jews. ‘Jews are Bolsheviks. Jews are thieves. Jews are violent’ – that was the propaganda.” Nadler made no similar point when Iran called Israel the cancer of the Middle East.

BUT JUST as the Jewish community was largely silent about the Trump-as-Hitler narrative, Greene received almost no mainstream pushback for her abhorrent comparison of Biden to the Nazi dictator.

The real failure here is not the American political system, which is becoming increasingly bankrupt, but the Jewish community, which does not publicly declare zero tolerance when elected leaders trivialize the Holocaust and degrade the memory of the six million victims.

Where are the Jewish Democrats and Republicans to decry and condemn those who abase themselves by comparing Trump, Biden or anyone else to Hitler?

For God’s sake, is this not the one thing that both sides can agree on? I know that in our brain-dead political environment we are bereft of any agreement on common values.

I often show my wife a story reported by Fox News in one way and quickly change the channel to CNN to see how it is reported in such a different manner. One can scarcely believe it’s the same news item. In other words, there is precious little objective truth in America.

Then let this be the one agreed-upon American truth. No one is Hitler who does not engage in genocide. Comparisons of Western leaders who don’t engage in mass murder to Hitler is an abomination that belittles the Holocaust and trivializes genocide.

In 2020, I completed a three-year book writing project called Holocaust Holiday: One Family’s Descent into Genocide Memory Hell. It details our family trip to the killing fields of Europe over several years, in an effort to confront the sheer horror and brutality of the largest mass murder in world history. The book is filled with painful stories of episodes like my daughter Cheftizba begging my wife and me not to make her spend her eighth birthday, on July 3, at Auschwitz (we took her to the Lodz ghetto instead).

The Holocaust is unknowable, and yet I know it. As a Jew, it is seared into my soul. I am married to a woman whose great uncle was murdered at Auschwitz at the age of 22 and whose grandparents survived Fascist bayonets being poked into their hiding place as they were smuggled across the Hungarian border in a farmer’s cart. I had the honor of knowing Elie Wiesel and cherished every moment I spent with the world’s foremost witness to genocide.

I am shocked that our community doesn’t go nuts and challenge every ignoramus who compares an American political leader to Hitler. No other community on earth would tolerate the deprecation if it was about the memory of 1.5 million of their children who were murdered by the German despot.

It’s time that as a global community we punish those who undermine the horrors of the Holocaust by comparing their political enemies to the Einsatzgruppen, the Gestapo and the SS.

Trump’s grandchildren are the direct descendants of holocaust survivors. Trump could have raised the moral bar high by starting his Pennsylvania rally with a statement that no one who is part of his political movement dares ever trivialize the Holocaust by calling any Democrat Hitler. And Oz, who has faced withering criticism throughout his campaign for refusing, as a Turkish-American, to recognize the Armenian genocide and being hesitant to voice his full support for Israel, could have won over critics by refusing to appear on the same stage as Greene, who engaged in disgusting conspiracy theories about Jews. But Oz, whose campaign has been a values vacuum from the outset, characteristically did not.

Greene seems intent on provoking the Jewish community and repeatedly denigrating our suffering, especially about the Holocaust. In May 2021, she was criticized by House GOP Leader Kevin McCarthy for her “intentional decision to compare the horrors of the Holocaust with wearing masks,” which McCarthy called “appalling.”

Few know better than Trump just how horrible it is to be compared to Hitler and few, therefore, would have the credibility of Trump to tell Greene that her vile comments have no place in the Republican Party or indeed in American political discourse