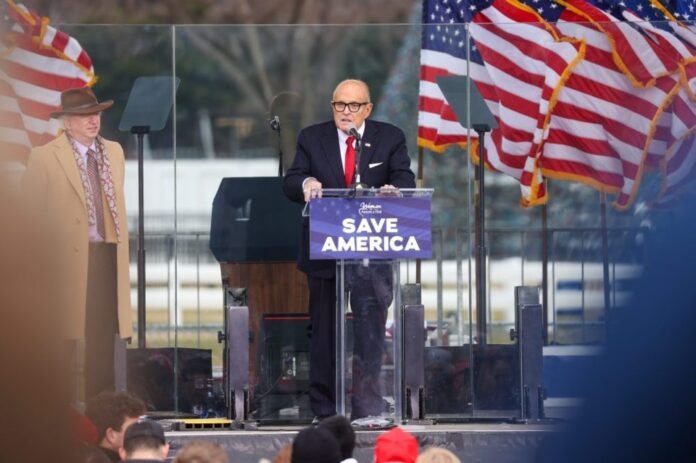 Rudy Giuliani , who called for a “trial by combat” before U.S. President Donald Trump incited an attack on the U.S. Capitol Jan. 6, says he can’t defend the president at his second impeachment trial because he was a “witness.

Rudy Giuliani, who called for a “trial by combat” before U.S. President Donald Trump incited an attack on the U.S. Capitol Jan. 6, says he can’t defend the president at his second impeachment trial because he was a “witness.”

Giuliani made the remark in a statement to ABC News Sunday, after the House of Representatives impeached Trump for “incitement of insurrection” last Wednesday in connection with the riot. Trump now faces a trial in the Senate at a later date, and could be barred from ever holding public office if he is convicted.

“Because I gave an earlier speech … I am a witness and therefore unable to participate in court or Senate chamber,” Giuliani told ABC News.

Giuliani had claimed on Saturday that he was “involved” in the case. A Trump campaign spokesperson later said that no lawyer or law team had yet been chosen.

Giuliani was one of several speakers who appeared at the rally before the riot. He helped drum up outrage over the election result with baseless claims of voter fraud — the same claims that he failed to prove in court after two months and dozens of legal challenges.

“If we’re wrong, we will be made fools of, but if we’re right a lot of them will go to jail,” Giuliani said during his speech, while touting a false claim of ballot tampering. “Let’s have trial by combat.”

Trump later repeated many of the same conspiracy theories and falsely claimed that the election had been “stolen,” before urging his supporters to show “strength” and march on the Capitol.

Five people died as a result of the attack, which failed to overturn Joe Biden‘s legitimate election win.

Millions witnessed those pre-riot speeches and the ensuing attack on live TV, while hundreds of U.S. lawmakers witnessed the riot firsthand inside the halls of the Capitol.

Many of those lawmakers, including a handful of Republicans, later voted to impeach the president for the attack that threatened their lives.

Giuliani is facing possible disbarment and removal from the New York State Bar Association (NYSBA) for his role in inciting the attack.

The NYSBA says it’s also received hundreds of complaints about the president’s lawyer over the last few months, as he has repeatedly argued baseless claims of voter fraud in public and in the courts.

Trump is the first president in history to be impeached twice, and Giuliani played a role in both episodes. He helped coordinate communication between Trump and Ukrainian officials in 2019 and 2020, as part of the president’s efforts to get dirt on Biden’s son, Hunter. That scheme formed the grounds of the first impeachment case against Trump, though he was later cleared in the Republican-held Senate at a trial with no witnesses.

Giuliani became the head of Trump’s so-called “elite strike force” of lawyers in November, after the president lost the election to Biden. Giuliani racked up dozens of court losses and embarrassing headlines over the course of that campaign, which he launched from the parking lot of Four Seasons Total Landscaping in Philadelphia, Pa., on Nov. 7.

Giuliani reportedly asked for an astronomically high daily fee of US$20,000 to contest the election, according to the New York Times, though he has disputed that number.

Trump has since balked at paying his lawyer for the failed effort, the Washington Post reported last week. White House officials have also allegedly been told not to answer Giuliani’s calls.

Joe Biden will be inaugurated as the next president on Wednesday.