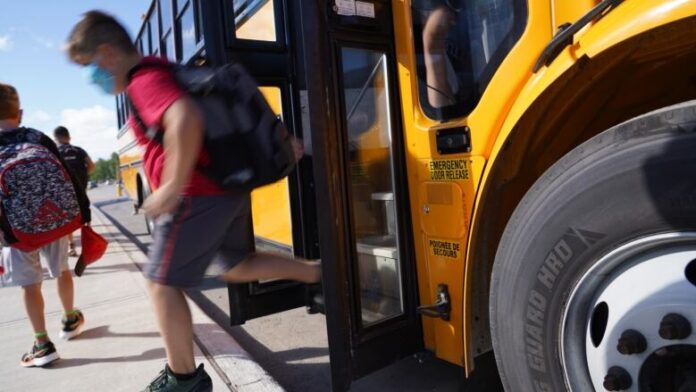 Back-to-school can be an anxious time for parents, students and educators under normal circumstances — but this year is unlike any other in recent memory, thanks to the global COVID-19 pandemic.

Parents are trying to decide whether to send their children to school, while administrators put measures in place to try to protect students and teachers.

Earlier this week, the federal government announced it would offer more than $2 billion to help provinces and territories re-open their schools safely. But parents and educators still need to make choices about how to proceed.

Risk management executive Rita Achrekar thinks she can help. She says that a system of local, easy-to-access information can help people make better decisions — based on reliable science — about schooling and safety issues.

Achrekar has worked in the financial industry for years, including nearly two decades at Scotiabank, and sits on the board of directors for the Canadian Investor Protection Fund.

Here is part of her conversation with Day 6 guest host Saroja Coehlo.

What are you hearing in your circles about the worries and anxieties parents have about sending their kids back to school this year?

Parents have had their kids at home for four to five months, so they do want to send the kids back to school.

But there’s also a lot of anxiety and apprehension. They’ve received a lot of information, but what they’re missing is some reassurance that everything’s going to be all right.

And how well has that worked out so far, making parents feel that way?

I was speaking with a friend of mine who is actually a very savvy risk expert, he works for a credit rating agency, and he said he’s feeling overwhelmed with all the communication he’s getting from the schools.

He cannot figure out whether 15 or 20 kids in a classroom is good enough. How many times does the airflow have to change in an hour? These kinds of things are just bothering parents.

Many parents of students are being asked to choose from two options — full, 100 per cent remote learning from home, or some kind of in-school model. And they’re also being told that switching from one option to the other may not be permitted, or is at least very difficult to do. What are your thoughts on that?

Yeah, being locked into one option or the other, it’s not responsive to the situation as it may unfold.

We’ve heard many times there’s going to be a second wave, this thing is going to be around for a bit. You know, we have to prepare for the longer road that’s ahead of us.

Today I think things look reasonably good, but as things go up and down how are parents supposed to respond? So a plan that is more flexible to the level of threat, I think that would alleviate a lot of concerns.

[Parents] are dying for clarity. They just want to know where we stand. Is it risky? And if so, how risky is it?– Risk management expert Rita Achrekar

You say what’s missing is a system that measures and communicates risk levels on an ongoing basis. What would that look like?

You may recall that after the September 11 terrorist attacks, people were feeling very vulnerable. There was a lot of anxiety, not dissimilar to what we’re feeling right now. And at that time, the government put in place a national terrorism threat level system, a scale of five: very low, low, medium, high, critical.

It outlined how the government would respond as it moved from one level to another. And the goal of this system was to keep the general public informed of the threat level.

I think everybody’s trying to figure this out in their own head and most of us are not experts at assessing pandemic health risks and all the factors that come into play, and parents are just feeling overwhelmed.

So if we had experts, medical health experts, epidemiologists, whoever, someone to say, “Today, we’re at two out of five, things can move up and down, but if things worsen we’re going to do these extra things.”

You’ve laid out a proposed system with four levels of risk, an early warning system, and what the response to each of those should be.  So what are they?

In the system that I envisioned, at “very low” and “low” it’s business as usual. You have to take all your normal precautions, wear your mask, try to maintain safe distance, wash your hands.

But when we get to a “moderate” level, the advisory could be, half the kids are going to use the gym or outdoor space. Or they may decide a number of kids need to be moved to on-line [schooling], just to maintain the health and safety of everyone.

It sounds to me like a lot of this is about communicating clear messages that we all understand.

Yes, they are dying for clarity. They just want to know where we stand. Is it risky? And if so, how risky is it?

For many months we’ve all been conditioned to hearing from the government and all the messaging from public health officials — stay at home, avoid unnecessary contact — and now suddenly an opposite message, schools are safe, send your kids.

There’s a lot of cognitive dissonance going on here.

You or your own kids are past school age now, but would you feel comfortable sending your kids back to school right now?

Looking at the data that I’ve seen, you know, I think I would feel comfortable sending my children to school today. But I don’t know what’s going to happen in September, October, November. So I think that’s where a lot of the anxiety is.

Written and produced by Pedro Sanchez, with files from Andrea Bellemere. Q&A edited for length and clarity.

Alberta’s new premier has revealed her cabinet. Here’s who is in charge of what