A look at how world powers are responding to the rapidly escalating conflict between Russia and Ukraine.

Ukraine has been on edge for nearly two months, with Russian troops massing on its border.

Russia insists the troops are only there to defend the country from NATO’s expanded presence in the region, but Western intelligence officials argue Moscow’s military buildup could signal the beginning of a ground invasion.

Moscow has been displeased ever since a protest movement unseated a pro-Russian government in 2014.

Although Russia insists it has no military designs, it also says talks that de-escalate the situation would have to involve NATO promising not to let Ukraine join and to keep forces out of Eastern Europe.

Al Jazeera takes a look at how world powers have reacted to the rapidly evolving crisis:

Despite the warning of sanctions, the US leader said he has “no intention” of sending troops into Ukraine.

There is also a question of energy supplies, given Russia holds the world’s largest natural gas reserves.

Senior Biden administration officials have said the US was in talks with major energy-producing countries and companies around the world about a potential diversion of supplies to Europe if Russia invades Ukraine.

President of the European Council Charles Michel expressed solidarity with Ukraine on Wednesday, saying: “A threat against Ukraine is a threat against Europe.” 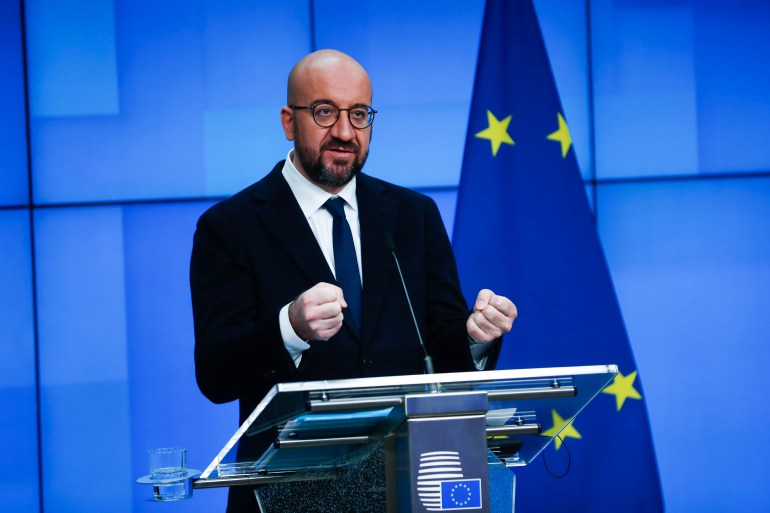 The United Kingdom has denounced Russia’s military building up near its border with Ukraine.

British Prime Minister Boris Johnson on Tuesday said the UK would not hesitate to impose sanctions on Russia if it chose to invade Ukraine.

“We in the UK will not hesitate to toughen our national sanctions against Russia in response to whatever President [Vladimir] Putin may do and the House [of Commons] will soon hear more on this,” Johnson told Parliament.

Johnson said Britain would look to contribute to any new NATO deployments to protect its allies in Europe if Russia invaded Ukraine.

If Putin’s goal was to keep NATO forces away from Russia’s borders, then “invading Ukraine could scarcely be more counterproductive”, he said.

China has said it wants to see all sides involved in the Ukraine crisis remain calm and avoid increasing tension, while warning Russia’s security concerns should be “taken seriously”.

“We call on all parties to stay calm and refrain from doing things that agitate tensions and hype up the crisis,” Foreign Minister Wang Yi told US Secretary of State Antony Blinken in a phone call late on Wednesday.

In an apparent reference to Russia’s objections to NATO’s expansion, Wang said that regional security could not be guaranteed by strengthening or even expanding military blocs, according to a statement from China’s foreign ministry.

Beijing has been strengthening its own ties with Moscow as tensions between China and the United States have grown across a range of issues.

French President Emmanuel Macron has said Russia would pay a heavy price if it chose to attack Ukraine, even as he welcomed dialogue with Moscow.

He has also expressed his country’s readiness to deploy troops to Romania to serve under NATO’s command, a move welcomed by Bucharest.

Germany has expressed its support for Ukraine throughout the crisis but has unlike other NATO members announced it will not provide weapons to Kyiv.

In February, “a complete field hospital will be handed over, including the necessary training, all co-financed by Germany to the tune of 5.3 million euros [$6m]”, German Defence Minister Christine Lambrecht recently told reporters.

“Weapons deliveries would not be helpful at the moment – that is the consensus in the federal government,” she said.

Meanwhile, Vice Admiral Kay-Achim Schoenbach, the head of the German navy, resigned earlier in January after coming under fire at home and abroad for saying that Ukraine would never regain the Crimean Peninsula, which was annexed by Russia in 2014.

The Nord Stream 2 project, a Russia-owned pipeline stretching from Siberia to Germany, has complicated Berlin’s position. Read more about that here.

Finland, which is not a member of NATO and has a long border and a difficult history with Russia, has enhanced its military readiness in the face of Russia’s military buildup.

Colonel Petteri Kajanmaa, head of the warfare department at the Finnish National Defence University, speaking on behalf of the armed forces, has said instability in the Baltic Sea region stemmed from the unpredictability of Russia.

“They [the Russians] have expressed their goals clearly but we do not know what actions they are ready to take,” he said recently.

Belarus, a close Putin ally, shares a border with both Russia and Ukraine.

President Alexander Lukashenko is strengthening its military forces at the border with Ukraine and will hold joint drills with Russia soon.

Lukashenko said the joint manoeuvres with Russia will be conducted on Belarus’s western border and in the country’s south, where it borders Ukraine.

Washington has warned Minsk that its government will face reprisals if it helps Russia to invade Ukraine.

Italy’s defence minister has said his country would uphold its NATO commitments in the Ukraine crisis, while underlining the need for a peaceful solution.

Italy’s defence ministry said on Wednesday it was committed to maintaining dialogue with Moscow, insisting on talks to seek a peaceful solution.

President Zoran Milanovic on Tuesday said Croatia would pull out of Ukraine should “one of the most corrupt countries in the world” come into conflict with Russia.

“This is all happening in Russia’s anteroom,” the president said, adding that an agreement must be reached “that takes Russia’s security needs into consideration”.

The outburst prompted Croatian Prime Minister Andrej Plenkovic to issue a rebuttal later on Tuesday, according to the Hina news agency.

“I want to apologise to Ukraine in the name of the Croatian government,” he said, noting that Ukraine, in 1991, was one of the first countries to recognise Croatian statehood as it emerged from the break-up of Yugoslavia.

Japan has announced that it will work closely with the US in the event of Russia invading Ukraine.

The discussion with the US regarding what would happen in the event of an invasion during a teleconference summit last week, a Japanese government spokesperson said.

President Klaus Iohannis said Romania is in talks with the US and France on how to enhance their troop count in his country, which he said was ready to host an increased NATO military presence.

“I have been constantly saying we are ready to host an increased allied presence on our territory,” Iohannis said.

“The current crisis proves once more that … consolidating allied presence on the eastern flank including in our country is very important,” he said.