President Donald Trump faced life outside his own political bubble on Tuesday, where his self-congratulation, buck passing and audacious falsehoods conspicuously failed to meet the moment when he was confronted by undecided voters.

Trump appeared at an ABC News town hall in Philadelphia, and peppered a socially distanced audience with the rhetoric and talking points that delight his loyal base. But if his goal was to satisfy relatively small groups of voters who polls show haven’t yet made up their mind, the President appeared to fall short and rarely addressed the substance of questions about his handling of the coronavirus pandemic, race relations and health care.
It was an unusual moment of exposure for a leader who demands constant public praise from his subordinates. On Tuesday night, audience members granted him the respect due to his office but none of the adulation he craves. 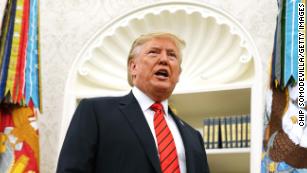 Trump dismisses voter questions on how he handled coronavirus
Trump was largely cordial and likely came across as strong to voters that love him. But his performance offered Democratic presidential nominee Joe Biden multiple openings only two weeks before their first debate clash — one of the last potential turning points of the White House race. First-term presidents who have spent years expecting deference from everyone they meet often get a shock in the first debate showdown with a challenger keen to get in their grill. Tuesday’s event suggests the surprise may be especially acute for Trump when he faces Biden on September 29.
Answers that normally draw wild cheers at Trump’s packed campaign events fell flat when he was confronted by voters who appeared to want to cut through bluster and propaganda. And his responses did little to recognize the magnitude of the challenges facing the nation in a fearful year, suggesting that the President has yet to find the language or the appeals that might turn around an election he so far seems to be losing.
On a day when America recorded more than 1,200 new deaths from Covid-19, Trump effectively told the country to ignore his own words to Bob Woodward downplaying the threat early this year even though he knew how bad it was.
He said he did a “tremendous” job on the virus, insisted “it’s going to disappear” and that “a lot of people think masks are not good.” He bizarrely said “herd mentality” would make it go away, in an apparent reference to herd immunity that medical experts say could cost several million lives. The President has pounced on Biden’s verbal slips as evidence that he lacks the mental capacity to be President. But his own confusing answers after six months supposedly leading the national effort to fight the pandemic failed to inspire confidence that he fully understands the implications of the emergency even now.
He also illogically complained that Biden, who has no power, had not followed through on a national mask mandate and claimed falsely the US response to the crisis was the best in the world. And the President denied any blame for how the pandemic has turned out — placing the entire responsibility on China, where the virus first emerged, and several times complained he is not getting the credit he deserves.
At the end of the night, the President was asked by a voter named Ashley West to cite the most difficult part of his presidency and asked what he had learned from it — and in a way that seemed jarring given that the 200,000th American will soon die from the disease, the President reflected on his own personal sense of loss.
“I learned that life is very fragile. I knew people that were powerful people, strong people, good people, and they got knocked out by this, and died. Six people. It was five until about two weeks ago. Now, it’s six,” Trump said.

The President became most exercised when denying reports that he referred to US war dead as “losers” and “suckers,” calling them “fake.” He made halting attempts to show empathy to a new US citizen from the Dominican Republic who lost her mother to breast cancer complications a month ago and asked him a question about immigration. Trump responded by telling her that it was terrible that people died alone in hospital due to Covid-19 — and turned the answer into an infomercial for his pandemic leadership. Biden, who has buried a first wife and two children in a life marked by tragedy, is highlighting his own empathy as a balm for the country at a grief-wracked moment.
Trump shrugged off questioners who asked him if he agreed America needed to reexamine its painful history on race, again arguing that there were a few “bad apples” in the police force who “choked” in incidents in which unarmed Black Americans were killed.
The President also falsely claimed that Democrats wanted to remove protections for patients with pre-existing conditions introduced under Obamacare. His own administration is currently arguing a Supreme Court case trying to destroy the Affordable Care Act, while Democrats seek to preserve the law. While Trump says he would protect pre-existing conditions, he has offered no credible health plan.
The President’s appearance came in a crucial swing state at a moment when he is trailing Biden by nine points in the CNN Poll of Polls as the country faces concurrent crises: a pandemic, the consequent economic crash, a racial reckoning and historic fires in Western states.
Nine percent of voters in a CNN/SSRS poll this month said they might still change their mind about who they will vote for. Trump’s task in the election appears to be to add less fervent voters to his coalition after spending four years incessantly playing to his base. But while his strongest moments Tuesday came on ending foreign wars and on the economy, and he likely pleased supporters with his unequivocal pro-police statements, the President offered few new policies or approaches at the event that differed from positions in three years when his approval rating has rarely climbed above the low 40s.
Trump’s campaign insists untapped seams of pro-Trump voters who sat on the sidelines in 2016 are being ignored by pollsters and will embrace the President’s hardline culture war rhetoric to sweep him to a second term.

Trump again denies evidence of his own voice

The town hall event exactly seven weeks before Election Day was a reminder of the kind of chaos, falsehoods and divisiveness that is a selling point for the President’s most faithful voters but is the kind of behavior that may prompt an undecided voter to turn away.
The stream of lies and alternative realities that the President promoted recalled a statement attributed to former Director of National Intelligence Dan Coats in Woodward’s book “Rage” that was published on Tuesday.
“To him a lie is not a lie. It’s just what he thinks. He doesn’t know the difference between the truth and a lie,” Coats is quoted as saying to former Secretary of Defense James Mattis.
Such commentary was borne out when Trump responded to a question by a first time voter from Pittsburgh who asked why he was captured on tapes made by Woodward as downplaying the pandemic.
“Yeah, well, I didn’t downplay it. I, actually, in many ways, I up-played it, in terms of action,” he said.
In essence, the President is inviting voters to refuse to believe the evidence of their own ears on his early attitude to the worst domestic crisis since World War II that has now killed 195,000 Americans and pitched 30 million out of work.
He is implicitly arguing that not only does he not deserve any blame for a response that lags other industrialized nations — the US has 4% of the world’s population and more than 20% of the Covid-19 cases and deaths.
But such a view relies on an interpretation that distorts the traditional sense that the buck stops on the Oval Office desk and instead relies on voters to believe a flagrant act of salesmanship that defies the reality of their own lives.
After Trump told Fox News earlier Tuesday that he had read Woodward’s book on Monday night, and found it “boring,” Woodward said that the President was living in an “Orwellian world.”
“He was told, he knew, he told me about it,” the veteran reporter told CNN’s Anderson Cooper.
“I don’t know, to be honest, whether he’s got it straight in his head what is real and what is unreal.”
News Source(CNN)