US Secretary of State Antony Blinken says Washington ‘will be prepared to act’ if Russia invades Ukraine.

Russia has plans to take “significant aggressive moves” against Ukraine, US Secretary of State Antony Blinken has warned, as tensions between Washington and Moscow continue to mount before a top-level meeting this week.

After a meeting of NATO ministers in Riga, Latvia, on Wednesday, Blinken said the United States was “deeply concerned by evidence that Russia has made plans for significant aggressive moves against Ukraine”.

Russia orders US diplomats to leave as Ukraine tensions escalate

What triggered tension between Ukraine and Russia?

Russia and Ukraine step up military alert with combat drills

Ukraine’s New York, a war-torn town where some shun Russia

Ukraine has accused Russia of deploying heavy-armoured vehicles, electronic warfare systems and tens of thousands of troops along the countries’ shared border – the second such Russian military build-up so far this year.

Blinken told reporters the US did not know whether Russian President Vladimir Putin “has made the decision to invade” Ukraine, however. “We do know that he’s putting in place the capacity to do so on short order, should he so decide,” the top US diplomat said.

Blinken’s comments come a day before he is expected to meet with Russia Foreign Minister Sergey Lavrov on the sidelines of an Organization for Security and Co-operation in Europe summit in Sweden on Thursday – and against the backdrop of Washington-led NATO talks on Ukraine.

Russian foreign ministry spokeswoman Maria Zakharova also said earlier on Wednesday that US embassy staff who have been in Moscow for more than three years were being expelled in apparent retaliation for US action against 27 Russian diplomats who were asked to leave the US.

Despite efforts earlier this year to ease tensions between Washington and Moscow, the relationship is under mounting pressure amid Western concerns about the Russian troop buildup near Ukraine.

In 2014, Moscow annexed Crimea from Kyiv and Russian-backed separatists seized a swath of territory in eastern Ukraine, igniting a conflict that continues to simmer to this day.

Earlier this week, Putin said at a forum in Moscow that any expansion of NATO military infrastructure in Ukraine was a red line he hoped would not be crossed. On Wednesday, the Russian president emphasised that the country would seek “reliable and long-term security guarantees”. 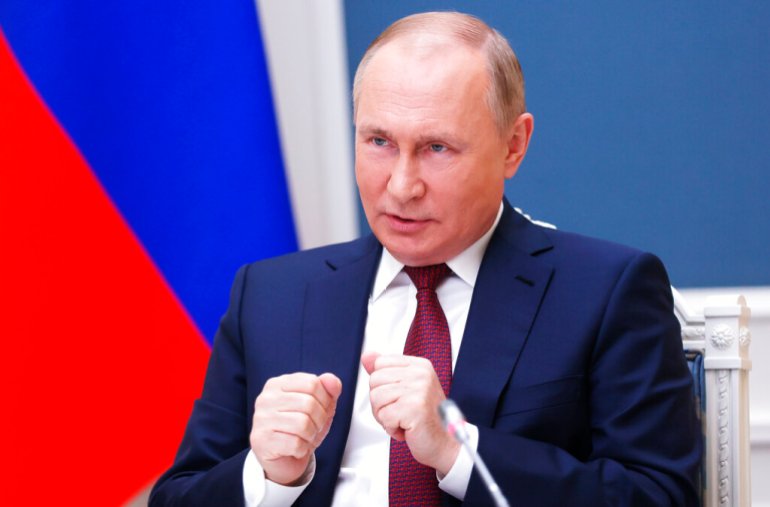 “In a dialogue with the United States and its allies, we will insist on working out specific agreements that would exclude any further NATO moves eastward and the deployment of weapons systems that threaten us in close vicinity to Russian territory,” Putin said.

On Wednesday, Ukrainian President Volodymyr Zelenskyy said Kyiv needed direct talks with Moscow to end the tensions and put a stop to the conflict in the country’s east.

Ukraine is not a member of NATO but Ukrainian Foreign Minister Dmytro Kuleba called on the transatlantic security alliance to put together a “deterrence package” and increase military cooperation with Ukraine to prevent Russian aggression.

Russian officials have previously said Moscow’s posture towards Ukraine is purely defensive and accused Kyiv of plotting to recapture by force areas held by pro-Russian rebels in eastern Ukraine. Ukrainian officials have denied the accusation.

On Wednesday, Blinken warned that President Joe Biden’s administration had made it clear to Russia that should it “follow the path of confrontation” with Ukraine, the US “will respond resolutely, including with a range of high-impact economic measures that we have refrained from pursuing in the past”.

He did not go into further details about what exact measures could be taken, but said they would have “far-reaching and long-lasting consequences”.

There is “tremendous solidarity” within NATO to pursue strong measures if Russia invades Ukraine, Blinken also said. “Should Russia reject diplomacy and reinvade Ukraine, we will be prepared to act.”

Meanwhile, Belarusian President Alexander Lukashenko said his country would stand with Moscow in any conflict with Kyiv. “I will do everything to make Ukraine ours. It is our Ukraine,” he said.