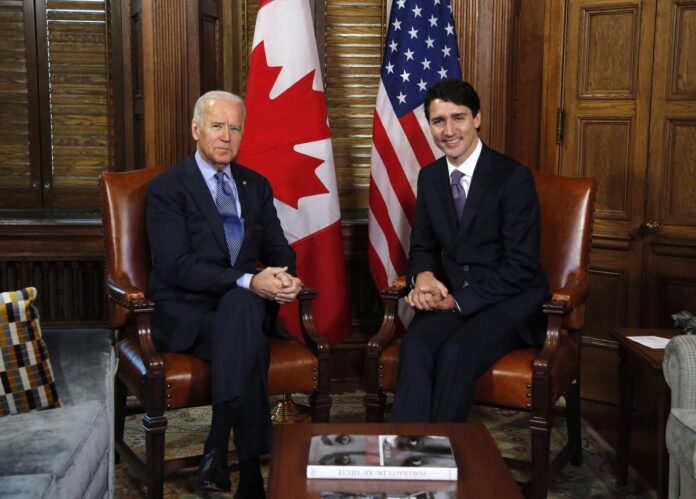 Justin Trudeau was named in the international press on Saturday as one of the quickest world leaders to issue congratulations to U.S. president-elect Joe Biden.

Trudeau had no immediate plans to call outgoing president Donald Trump on Saturday, his office said. Which would make sense, given that you can’t say “sorry you lost” to a leader who doesn’t admit defeat.

The speed of Trudeau’s well wishes to Biden can probably be best explained by the fact that he’s been waiting four years to send them to a Democratic challenger for president.

Trump in the White House was definitely not Plan A for Canada in 2016. Trump’s re-election in 2020 was also Plan B, no matter how much this Canadian prime minister endeavoured these past few months to display an official stance of neutrality.

Still, odd as it may seem, the four-year gap may actually turn out to have been useful for Trudeau and the Canada-U.S. relationship under Biden.

First of all, Trudeau’s connections with Biden are arguably deeper than the ones he had with Hillary Clinton. While there’s no question that Trudeau would have worked well with a Clinton White House — certainly less tensely and chaotically than under Trump — the ties with Biden may turn out to be stronger.

Biden will presumably want to demonstrate that he’s a better friend to Canada and the world than Trump was. While Trump only grudgingly and often belatedly recognized the deep connections between Canada and the United States, Biden needs no education.

I’ve been thinking back to a trip I did to Washington in early 2004, when Paul Martin was prime minister and spoke to the Senate foreign relations committee. The top-ranking Democrat on that committee, one Joe Biden, wandered out of the room and came over to speak to the little gaggle of Canadian media waiting outside. I recall we were enormously grateful.

Biden was filled with praise for Martin and Canada. “Canada and the United States, it’s like ham and eggs. It’s kind of hard to separate them, whether we like it or not. Thank God, at least on this side, we love it,” Biden told us.

Then of course there is more recent history — Biden’s late 2016 trip to Ottawa, where he heaped praise and obligation on Trudeau, nudging him to carry the progressive torch in the world in Obama’s absence. Get ready to read a lot about that visit and Biden’s remarks in the coming days and weeks.

Trudeau will be wanting Biden to revive the tradition, scrapped under Trump, for any new U.S. president to make Canada his first foreign trip after taking power. That may well be one of the topics of their first conversation, likely to take place in the days ahead.

Biden’s campaign manager, Jen O’Malley Dillon, is a U.S. political consultant who worked with Trudeau back before he became prime minister. Her old firm, Precision Strategies, won a couple of big U.S. awards for the “data and analytics strategy” it contributed to Trudeau’s winning campaign in 2015.

Chances are that O’Malley Dillon’s email inbox was getting filled on Saturday with more private congratulations from her old Liberal friends in Canada.

Given their choice, Trudeau and his Liberals probably would have opted to work with Democrats over the past four years. The prime minister’s officials have been saying that while there will be issues, notably the Keystone pipeline and ongoing American trade protectionism, the disputes will be handled more “normally.” That means not having to worry that standing up for Canada will automatically be interpreted as an insult by a thin-skinned American president. It means diplomacy conducted through normal channels, not Twitter.

But those four years with Trump won’t have been a total waste of time. The existential threats Trump posed to the Canada-U.S. relationship have hardened Trudeau and his government; they know in exquisite detail just how the two countries work together, because they’ve been forced to defend them at every arbitrary turn in the Trump administration.

The two countries may be still “ham and eggs,” in Biden’s 2004 turn of phrase, but Canada knows exactly how those menu items ended up on the plate.

So whenever Biden does come back to Canada, to pick up that conversation with Trudeau where he left it in late 2016, he will find a country that takes a little less for granted in the Canada-U.S. relationship.

But Trudeau and Biden will have something new in common too: profound relief that Trump’s chaotic reign is over.