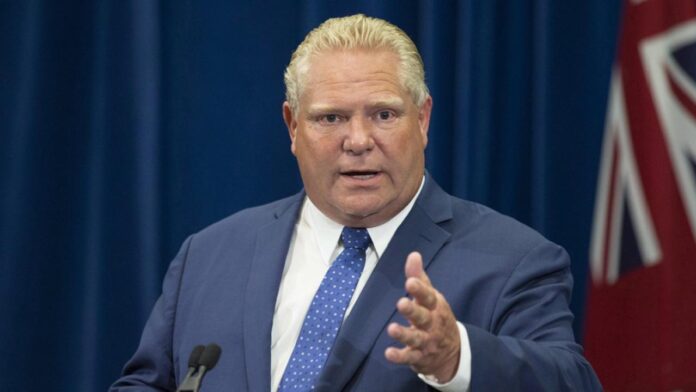 Ontario reported an additional 409 cases of COVID-19 on Thursday as the province announced it would shift back toward testing only symptomatic people and those in high-risk groups to relieve pressure on publicly funded testing sites and clear a severe backlog of samples.

The news comes as Premier Doug Ford said his government will invest $1 billion to expand testing and contact-tracing capacity heading into flu season, including some $30 million to “prevent and manage outbreaks” in priority settings like long-term care facilities, retirement homes and schools.

The province’s network of labs is currently facing a backlog of 53,840 test samples, the most since cases of the respiratory infection were first detected in January.

During a media briefing Thursday morning, health officials said that publicly funded testing sites are moving away from offering tests to asymptomatic people. Instead, the province will return to a more targeted approach, as hospitals, testing sites and labs have reported being overwhelmed by public demand for tests.

“We know that over the summer when we opened up testing to anybody who wanted it, we did not find cases. Right now, we need to focus on people who are symptomatic, people who are contacts, people in outbreaks, or in very specific populations where we have designated that testing needs to occur,” said Dr. Barbara Yaffe, Ontario’s associate chief medical officer of health.

“Your average person out there who is not exposed to a case, who is not part of an outbreak, has no symptoms, should not be going for testing. There’s no value. In fact, what we found is when there’s very little COVID in that group, what we end up with is false positives, which just complicates things even more.”

Testing of asymptomatic people will be limited to pharmacies, an initiative announced by Ford earlier this week. The government has said that testing will be available at 60 pharmacies by week’s end, with a plan to expand the initiative in coming weeks, although representatives at some pharmacies on the list told CBC News they will not be ready by Friday.

According to Matthew Anderson, president and CEO of Ontario Health, the province hopes to have capacity for up to 50,000 tests per day some time in October.

“We continue to work toward the 50,000 goal. We’re very close to it now. We are struggling a bit with some of our supply chain challenges,” said Anderson.

“We continue to build that capacity out, and do expect that we will be in that range in the next couple of weeks.”

At his daily news conference, Ford acknowledged that the updated testing guidelines are a move away from his government’s messaging in recent months. Over the summer, he repeatedly encouraged anyone who wanted to take a test for the novel coronavirus to get one. But that has become untenable, he told reporters, as school has restarted and the province prepares for the upcoming flu season.

The focus on those showing symptoms is part of Ontario’s fall COVID-19 strategy, which Ford and Health Minister Christine Elliott have been releasing in stages this week.

Meanwhile, a group of physicians and health care leaders issued an urgent call for the province to immediately tighten restrictions on non-essential businesses and activities that lend themselves to gatherings, including dine-in restaurants, bars, nightclubs, gyms, theatres and places of worship.

“Given the sharp rise in COVID-19 cases over the last two weeks, and the speed at which this virus spreads, now is the time to put public health measures in place to immediately limit opportunities for disease transmission,” the Ontario Hospital Association said in a news release Thursday.

The group is also calling for non-essential businesses to have employees work from home and for universities and colleges to hold classes online wherever possible.

They note Ontario has seen a seven-day average of about 400 cases per day, a figure last seen at the height of the pandemic in May.

“Without immediate action, we know from international experience that this extremely contagious and life-threatening virus will spread rapidly through our schools, long-term care homes, retirement homes and other congregate settings.”

Consistent with recent weeks, a majority of new cases were concentrated in three public health units:

Elliott noted in a series of tweets that about 63 per cent of the newly confirmed infections in today’s update involve people under 40 years old.

Thirty-one are classified as school-related, including 24 students, three staff and four categorized as “individuals not identified.”

The province’s website tracking outbreaks in school and child care centres — which lags behind information parents would get directly from their school — shows there have been at least 210 school-related cases, including 101 students who have been infected.

Ontario has now seen a total of 48,496 confirmed cases of COVID-19 since the outbreak began in late January. Of those, about 86.4 per cent are considered resolved. Another 286 were marked resolved in today’s report.

There are currently some 3,774 confirmed, active infections provincewide, the most since June 9.

Ontario’s official COVID-19 death toll increased by one, and now sits at 2,836. A CBC News count based on information provided directly from public health units puts the real toll at 2,876.

Further, the province’s network of labs processed more than 30,600 tests for the novel coronavirus yesterday; however the Ministry of Health notes that that figure provides an incomplete picture because of a temporary outage at Public Health Ontario.

Sabrina Maddeaux: ArriveCAN’s a menace. It needs to be shelved