Quebec appears to be exceptionally unpopular among Canadians polled by Leger Canada who, when asked which province is their least favourite outside their own, put Quebec at the top of the list.

According to a recent Leger-Postmedia poll, 21 per cent of respondents put Quebec in first place for their least favourite province, beating Alberta, which garnered 10 per cent in the unpopularity contest.

Nunavut, Saskatchewan, and Ontario came next. However, the most popular answer was “prefer not to answer,” at 24 per cent.

According to the firm’s demographic analysis, three in ten Atlantic residents said Quebec was their least favourite, as well as 31 per cent of people in the prairies, and a quarter of Ontarians and B.C. residents.

The poll also asked respondents to provide a reason for their disdain. While other provinces got docked for the cost of living, presumed safety, or a lack of things to do, Quebec found itself disliked for something more personal: people.

When asked “what is it about that province/territory that makes it your least favourite?” 49 per cent of respondents marked “the people.”

Alberta and Ontario also lost points for its population. While more popular than Quebec, 47 per cent listed “the people” as the main reason for disliking Alberta, and 30 per cent said so for Ontario.

Further down the list, 17 per cent of people said Quebec was too expensive, while 15 per cent said they “don’t know anyone there.” 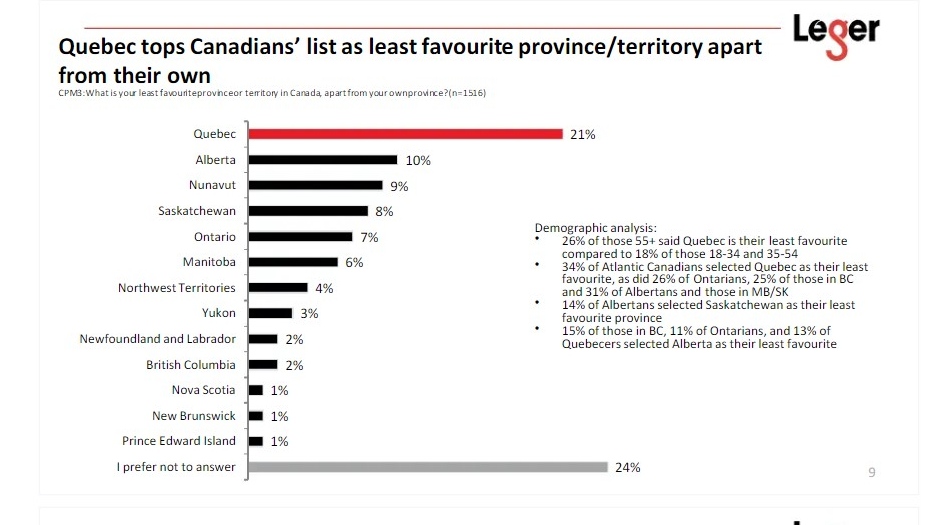 ‘A THREAT TO NATIONAL UNITY’

Three in 10 respondents also felt Quebec posed a “very serious threat” to national unity. About two in ten said it was not a serious threat. The same proportion said they didn’t know.

Alberta was also particularly threatening, according to respondents.

SO WHO’S THE FAVOURITE?

It was a landslide victory for British Columbia with three in ten per cent of respondents calling it their favourite province outside of their own.

Just six per cent of respondents said Quebec was their favourite.

Inside Quebec, two in ten people said New Brunswick was their favourite. Outside Quebec, just three per cent answered that way.

Canada’s apparent crown jewel, B.C., garnered high scores in geography and landscapes (65 per cent), and nature and wildlife (60 per cent).

Quebec, on the other hand, did well in arts and culture, as well as history categories.

Interestingly, 21 per cent of respondents said Quebec was their favourite because of “the people,” beating B.C. by about 10 per cent.

The Leger poll was filled out by about 1,500 Canadians. Most of them were from Ontario (39 per cent), while others came from Quebec (23 per cent), B.C. (14 per cent), Alberta (11 per cent), Atlantic Canada (seven per cent), and Manitoba and Saskatchewan (six per cent).

Heat and humidity Sunday with a small chance of showers