Summer started slowly across Canada, but it has definitely made up for lost time with a strong finish. Will this pattern continue through September? To find out, please read on.

However, before we get to our September forecast, here is a quick recap of what we saw across Canada during the month of August.

Warmer than normal temperatures dominated across nearly all of Canada during August. This is highlighted by the various shades of orange on the temperature anomaly map below. 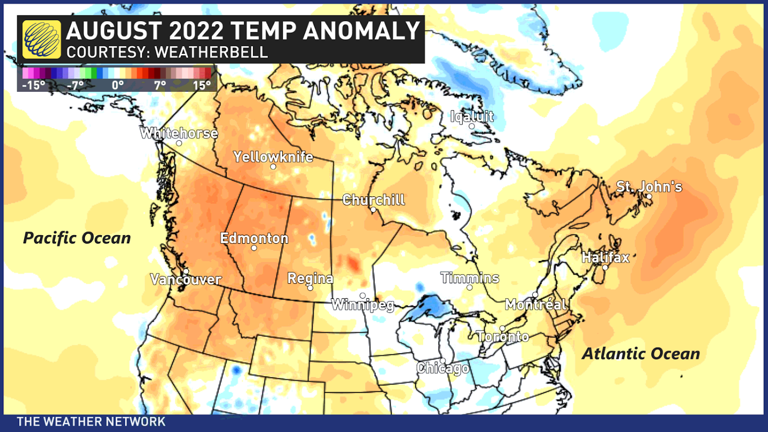 In fact, for many communities across western Canada and in Atlantic Canada, August 2022 was one of the hottest Augusts on record. This includes much of the south coast of B.C., Edmonton, Calgary, Saint John, Gander and St. John’s.

Here is our forecast for September 2022.

We expect that all of Canada will be warmer than normal or near normal for the month. Notice that we do not have “colder than normal” temperatures for anywhere in Canada on the forecast map.

This means that there will be more opportunities to savour warm summer weather (especially during the first half of the month) before colder weather begins to dominate.

Of course, there will be shots of cooler weather to remind us that we are heading into autumn, but the periods of warmer than normal weather will outweigh the cooler weather for most of the country.

However, for parts of northern Canada, northern Manitoba, northern Ontario and northwestern Quebec, the back-and-forth temperature swings should come close to offsetting each other and result in near normal temperatures.

Early September is also expected to be relatively dry across most of Canada with widespread drier than normal conditions, and this pattern is expected to persist deep into the month.

Once the tropics become more active, the anticipated pattern and the much warmer than normal ocean water temperatures in the eastern Atlantic gives us a higher than typical risk for some tropical impacts to the region.

We all know that as we get deeper into the fall season, colder weather will eventually win out. However, is the warmer than normal start to the season a sign of what is to come for the rest of fall, or should we brace ourselves for an abrupt transition to a colder pattern?

Heat and humidity Sunday with a small chance of showers